Samugheo Between History and Legend

Samugheo has many locations linked to history and legend, handed down through the generations and up to the present day.
Stories of legendary characters and dark, magical creatures ,who add a touch of mystery to the Samugheo area.

Reduced to just a few ruins, the Castello di Medusa, an ancient military settlement, square in shape and originally 120 metres long and 40 metres wide, today,  is left with just some of its elements, including the watch tower. In any case, whether it is the mythological name or the impervious setting on a limestone rock surrounded by the Rio Araxisi, what we do know is that the castle has inspired an almost limitless series of legends and popular tales that have amused – or terrorised – generations of Samughesi during winter evenings around the fire.

Today, it is still said that the ghosts of the old owners continue to wander through the ruins and that its walls conceal precious treasures. These treasures are supposedly protected by the spirits of those who guarded them when they were still alive and who will transform them into heaps of stones when living people approach.

According to the best known of the legends, Medusa was the daughter of King Phorcys, from whom she inherited the throne, ruling over Sardinia for 28 years. 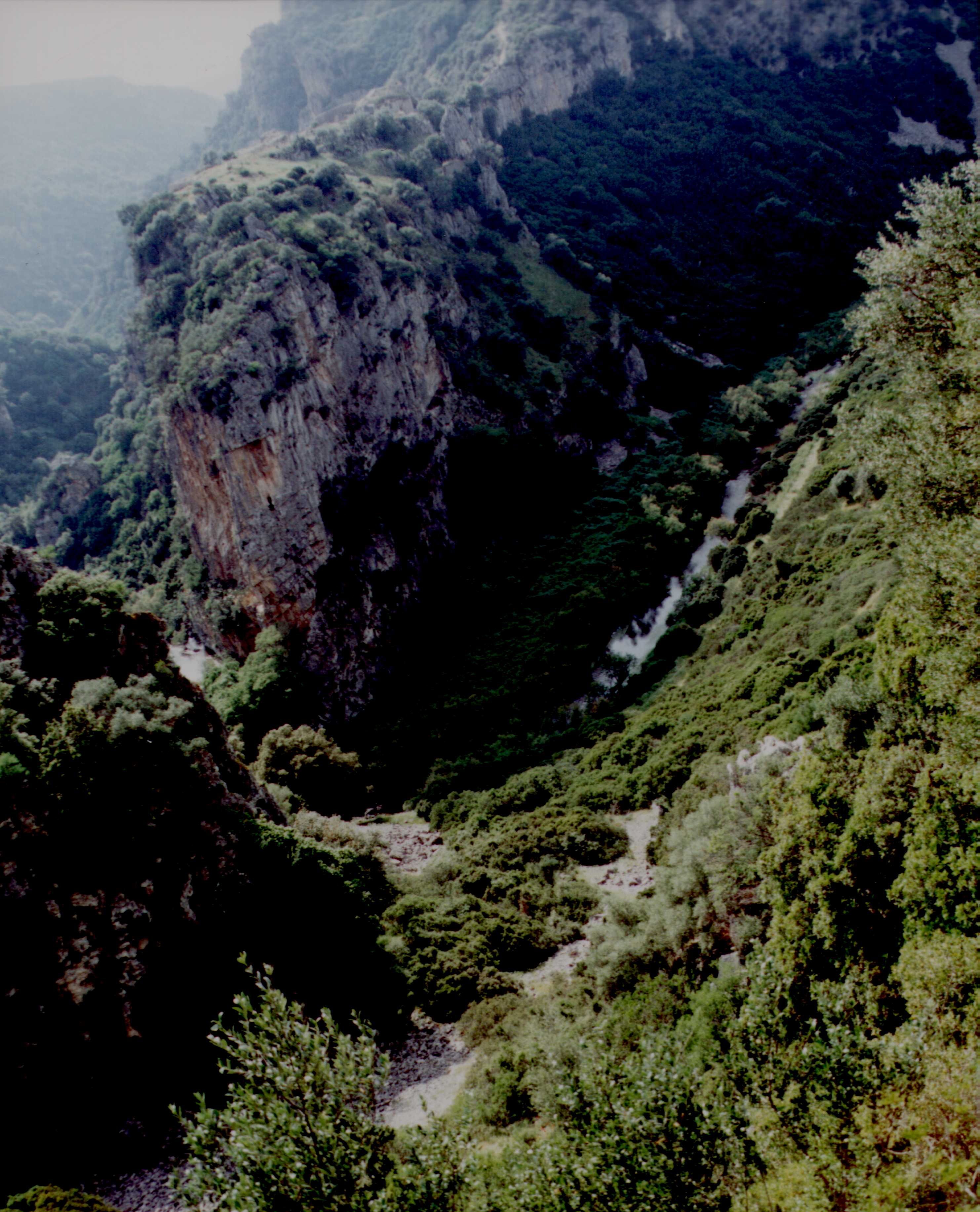 As happens only in legends, the woman was not only stunningly beautiful – the most beautiful woman on the island – but also rich and with many gifts, such as uncommon strength, which she showed during long hunts. One of her lovers, who lived in a nuraghe near Samugheo was the subject of an enchantment by Medusa, causing his horses to leave backward-facing hoof prints to confuse the enemy.

Another version would have it that Medusa was the daughter of Thorco (note the similar sound to the name of the first protagonist), lord of Samugheo and of Mandrolisai, who he left his wife Costanza and daughter, Medusa, still a child, without news of him for years while he was on the crusade to reconquer the Holy Sepulchre with his knights. After many years, the knights returned from the Holy Land, bringing news of the heroic end of Thorco, who died defending the Holy Sepulchre. His widow went mad with grief and died, while Medusa inherited the burdens and honours of her father, and now she needed a husband. After refusing many suitors, the woman fell in love with a pilgrim prince who had come to the castle seeking aid for himself and his injured soldiers. Once restored to health, the prince needed to continue in his duty and set off for war, in spite of Medusa’s attempts to keep him with her. As he left, the princess gave him a carnation, which the young man fastened to his breast, and he was still wearing it when he returned, dead, on his horse. It seems that wild carnations continue to grow abundantly, year after year,  in memory of the unhappy love story.

Since the name of the male protagonist, used in different versions with a host of variations, the legends may be based on the historical figure of  Orzocco de Zori, judge from Arborea, who was given the fortress by Pope Gregory VII in 1075. Orzocco, of course, did not take part in any crusades, although he was asked by Pope Gregory to commit to spreading and establishing Christianity in Sardinia.

On the other hand, the recurring elements in the different versions of the legend, as in the myth, are the norm: in a third version of the myth, Medusa was a man who, defeated by Atlas, took refuse in a gorge, building a castle in which to conceal his treasures. Inside the fortress, he met a fairy, Jana, Maria Cantada or Icantada. The fairy spent her days weaving linen on a solid gold loom and when she struck the boxes on the loom, it made a sound similar to the sound of a bell, which could be heard a long way away. This Medusa, like the lover in the first version withf the same name, when he went to Maria’s home, he would shoe his horse the wrong way around to confuse the enemy and protect his treasure. It is said that en route, he would stop to let his horse drink in a spring that is still known as Sa funtana de su Rei.

In Pappudelei, there is a rock known as  Sa conca de Maria Cantada, inside which there was once a solid gold loom. Maria Cantada was engaged to King Medusa and when he went to visit her at home, he would shoe his horse the wrong way round to confuse his enemies.

Sa coga is a demon, a female spirit who, during the day, would take on the appearance of a woman, while at night, she would become a ghost.
Her characteristic is that she was always born after six other sisters.
According to the traditions of Samugheo, during the night, the woman’s soul would leave her body and go to the home of an envied person, usually a woman who had recently given birth or a baby not yet baptised.

Su Tragacorgios is also a  creature linked to the world of the occult. He is a spirit who would wander the town at night, dragging the skin of a dead animal with the head still attached behind him, making unbearable noises and terrorising the inhabitants.
The story tells that if su tragagorgios stopped in front of your home, it would mean a death would take place there the next day.
The following night it was the turn of su carru de sa morte who would come to take away the soul of the deceased.
In the periods when there were more deaths than usual, seven priests would celebrate sa missa de s’arretiru to drive the spirit out of the town.

Everyone in Samugheo was scared of a devil called Maschinganna, who would sometimes appear to people as a being with two heads, while at other times, he would hide among the livestock to terrorise or mock the shepherds.
There are different stories about this devil: one in particular is about a father with five children who, having nothing to feed them, decided to go out one night in search of food. Near Nugreo, he saw a large ram and decided to load it up on his shoulders and go home, sure that the animal would be enough to feed his children for a few days. A short distance from his home, he saw another animal, similar to the one on his back, this time on a wall. The animal greeted him and the man answered, without realising that the animal on his shoulders had disappeared. Su Maschinganna also had the power to split into two.

In Sardinia, like in other regions, there are places that people prefer to avoid, either because of superstition or fear. These places are generally linked to incomprehensible events or popular legends.
There’s one in Samugheo too: Sa Silida e sa Cresia.
There are so many stories about this place in town. One of them is about a shepherd who took his flock to Sa Silida e sa Cresia when the grass was tall. One afternoon, while the flock was grazing, the shepherd fell asleep under a tree and at a certain point, he was woken by something falling down onto his head. Sure it was a lizard, he looked around him to find it. He was stupefied to find a small cross beside him. Realising where he was, he was quite upset by the fact.
A short time later, he was called to fight in World War I, from which he never returned.